About Tax reform In China

By Grace
The tax reform in USA has impacted the global world. Like a pumper, it can draw global capitals back to America.
Among the main economic entities, Chinese government states that they will pay attention to it but some countries
begin to feel uneasy.
Rationally, in aspects of tax inform, China used to undertake great pressures and now tax reduction competition is
raised in USA and China
was supposed to face more pressure. But the truth is that it’s less likely for China to follow USA to have tax reduction
according to the declarations of competent department and official media. There are several reasons.First, it’s unclear
how much impact China will have to face under American tax reform. Perhaps, it’s not as severe as the rumors say.
As Tax Cuts and Jobs Act was published in America on April 26, Liao Tizhong from PRC accepted the interview and said,
“It’s fine for Trump to reduce tax but the big countries need to be responsible for that. China is the second largest
economy in the world and we shouldn’t and we won’t be irresponsible.”
On December 4, Central Kitchen subordinate to People’s Daily published an article that tax reform brings not only favorable
factors. The poll of 51 to 49 illustrates that the influence remains be.
The Xinhua News Agency premised the specialists that a lower tax rate may not urge enterprises to increase investment for
they may invest in monetary markets or share the profits with.
Therefore, we can’t draw a conclusion that enterprise investments will certainly flow to countries with lower tax rates by
simply comparing the corporate tax rates of enterprises of various countries.
The factors influencing enterprise investment include market size, supply chain, industrial cluster, business climate,
legal environment and macro policies.
As Economic Daily premised the specialists that it’s predicted that the tax reform may have an effect on China.
China is creating and numerous investment opportunities. It’s not likely that America
will withdraw capitals from China because China didn’t pay enough taxes. It’s not a universal phenomenon.
Secondly, China has reduced the taxes hard.
It’s considered that there is Tax Cuts and Job Act in USA and China have replaced the business tax with a value-added
tax so we can see that the tax reduction in China is also powerful.
As the article in Economic Daily pointed out that American government reduced the taxes by the capital’s will and the
government becomes debt-ridden. China won’t have competitive tax reduction
because Chinese government must consider government liabilities.
Actually, China has reduced the taxes to cope with American measures so that Chinese government only needs to element.
According to Liu Shangxi’s statements in People’s Daily, although American has passed the act and reduced corporate tax
rate from 35 % to 20 %, that’s also what China is doing these years and the
figures have been over one trillion Yuan.
As shown in the data, VAT experimental units will be disparked and the impacts will keep producing influences. From May
2016 to September 2017, taxes of nearly 1.0639 trillion Yuan are reduced
What’s more, the member of the national committee of CPPCC, Zhang Lianqi said in the interview of People’s Daily that
Chinese government has released the policy in advance and it has an obvious
bucking effect to America’s policies.Thirdly, it’s not allowed for China to have substantial tax reduction.
The two reasons above are from official media which stands for the authority’s attitude to some degrees. Therefore, from
the current view, Chinese government is less likely to reduce the taxes.
Actually, the more important reason is that under the current economic circumstances, China can’t have substantial tax reduction.
According to researchers of SIFL, China has a name called infrastructure spree. The infrastructure does pull China’s economy.
What’s more, China puts forward the Belt and Road which can allow Chinese capitals and infrastructure capacity to go out.
It all derives from financial strengths of China.
Therefore, if China follows up the competition of tax reduction, then the mode of infrastructure will be weakened. And the
mode of economic development will be challenged
Moreover, apart from some first-tier cities, the fiscal revenue of most of the regions in China can’t cover the expenditure.
At the end of the last year, according to the data of National People’s Congress, the debt ratio of some provinces and regions
have been over 100 % including 100 municipal levels and 400 county levels.
Under such circumstances, I think we should still stick to the immediate stuff and work hard.

Safety is the top priority when designing a warehouse and choosing storage. Accidents and injuries in warehouses are preventable and come with many serious consequences. Preventable costs of a rack collapse include worker’s compensation and insurance rate increases, fines and safety violations, legal expenses, and replacing storage... read more 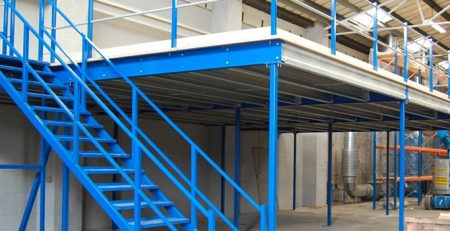 Nowadays, the new era of e-commerce service is constantly promoting the warehousing and logistics industry to a faster growth period. Now, it has a variety of advanced technology and equipment production in the continuous application of the freight logistics warehouse. Their application also greatly... read more